At the beginning of this year, i embarked on a journey to see if it was possible to change the lives of Australians in a positive way.  I thought to myself,  how would i inspire people to challenge themselves get out of their comfort zones and kick old habits.  I knew that getting people’s attention was difficult as work and responsibilities leave little time for the pursuit of happiness.

So here is what I came up with:  Project Auswish

So far Auswish has granted six wishes with mixed results:

wish #1 “to transform my body” By Mick Phan 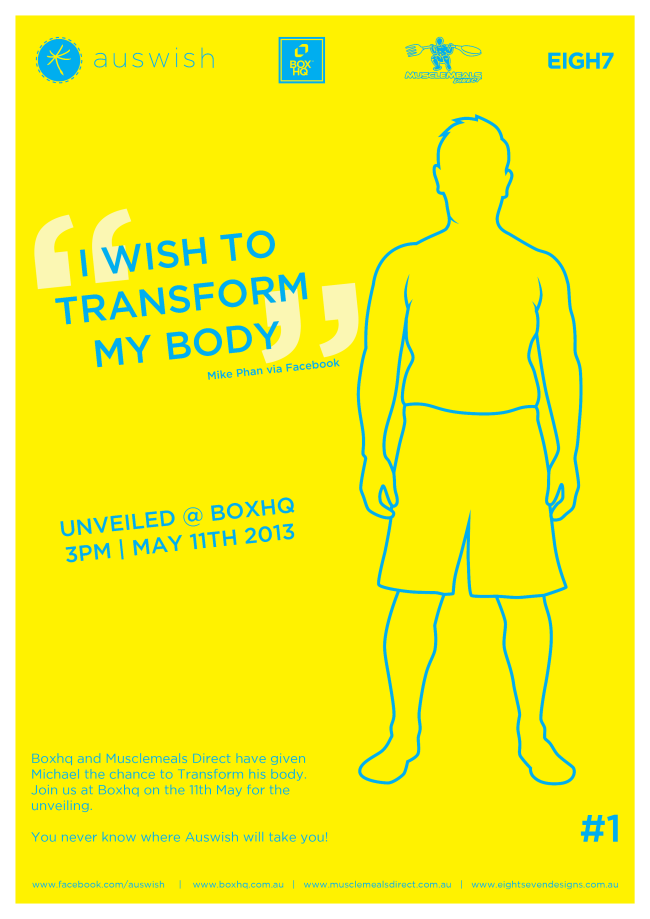 This wish was granted by finding two generous sponsors.  First was Boxhq in five dock, who supplied 12weeks unlimited access to their facilities.  Second was Muscle Meals Direct, who feed Mick healthy clean food three times a day for the 12 weeks.

Now with the two sponsors all we needed was the commitment of Mick and our first wish was a possibility.

here are some links to the results:

So wish #2 was quite a random one.  17yr old Nick found us on an add I put up on Airtasker. He wanted to test Auswish to see if it was a joke or not. What happened was indeed random but positive in result.  When I replied yes to his request for a thai punching bag, Nick thought about it and opted to give it to charity.  We both thought, what charity is going to want a punching bag?  After much deliberation, “the bag of good deeds was born!”  So instead of giving the bag to charity, we were going to raise money with the bag and give that to charity instead.  Here is how it works: 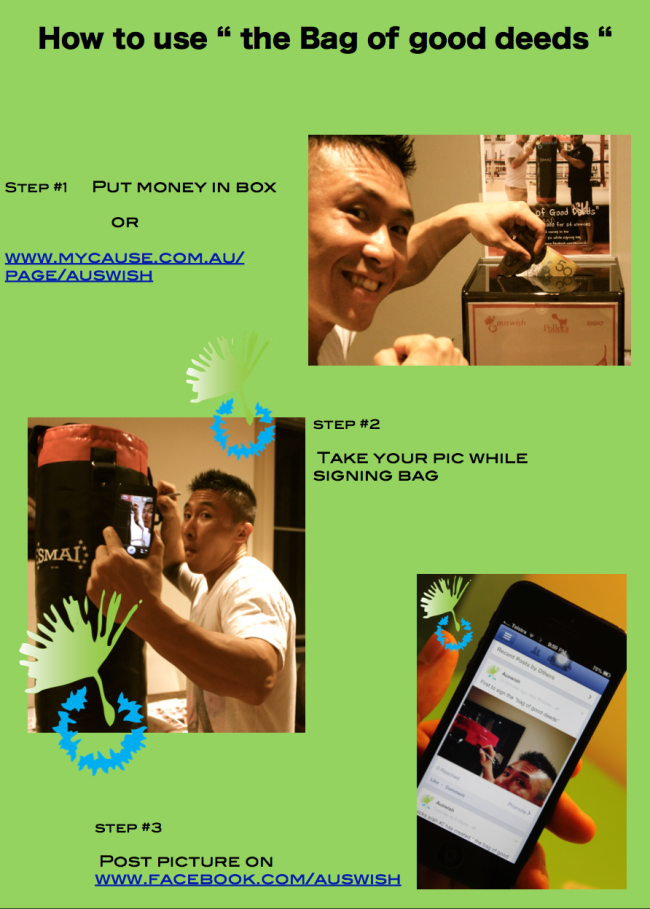 We haven’t reached the goal amount yet, I have found that raising money is much easier with friends and family and almost impossible online or by marketing methods.  People will not part with cash unless you are credible or an established charity.  It’s definitely a trust issue, one that we must solve in order to raise money for future wishes.

here are links to progress so far:

Here is one we have in progress.  Josh is a 16 yr old who is sick of his current lifestyle of drinking partying and smoking.  He asked Auswish to grant his wish to ” get fit n quit”

So we asked his local gym if they wanted to help a local kid kick some bad habits and point him in the right direction.  Boy were we lucky!  We found Jamie Milne, the general manager of fitnfast rouse hill.  He has taken Josh under his wing and with his company supplied Josh with 12 weeks access to support and facilites.

Here is a teaser of Josh’s wish:

This is another one we have in progress.  Adam is embarking on a journey to save his own life.  Before he started his wish he weighed in at 150kg, found it hard to sleep and breath.

here is an introduction to Adam:

Project Auswish Has begun and I am proud to say that Aussies have begun to grant each others wishes.  I have met amazing people, and seen true determination from ordinary Aussies that simply wanted to change for the better.

It’s early days for Auswish and it’s going to be up hill for awhile, but who’s with me?